We are continuing the rollout of our previous update to our North America and Europe regions.

As we are combining this with other backend maintenance, the entire network will be down for maintenance.

We have no set end time for this maintenance.

UPDATE: The below now applies to ALL regions.

As we get closer to our SwarmTastic Update, we are starting to introduce parts of it to our public network. We're starting today with a rollout to the Asia region.

In today's update, live only on the Asia region, we've introduced the required changes for Custom Servers. These servers, which will be initially launching with Swarms, allow you to control many aspects of a game. For example, you will be able to tweak (or disable!) the Leap delay in DeathRun, the shop prices in Treasure Wars, set the theme in Just Build, and much more.

Custom Servers will be in staff beta until testing finishes. After this, we will grant access to our Hive Partners. General availability will come with our Swarms update.

This update also contains our Group Chat backend, which in turns enables Party Chat. We want to stress that party chat is not, and should not be used as, private chat. Most notably:

This update might not seem like much (yet), but this is one of the biggest hurdles out of the way for our upcoming Swarms update: it contains most of the (backend) code it relies on. Because of the complexity of the changes, we will be closely monitoring this update. If all goes well, we hope to bring the above changes to the other regions next week.

You can open the in-game leaderboards with the following command:

More updates, including visual improvements to this system, coming soonTM.

Some of the above changes are thanks to the feedback left on Update 1! If you have any suggestions, leave them as a comment on this post. Here's some answers to common questions:

Additional functionality is now available with the in-game (monthly) leaderboards: 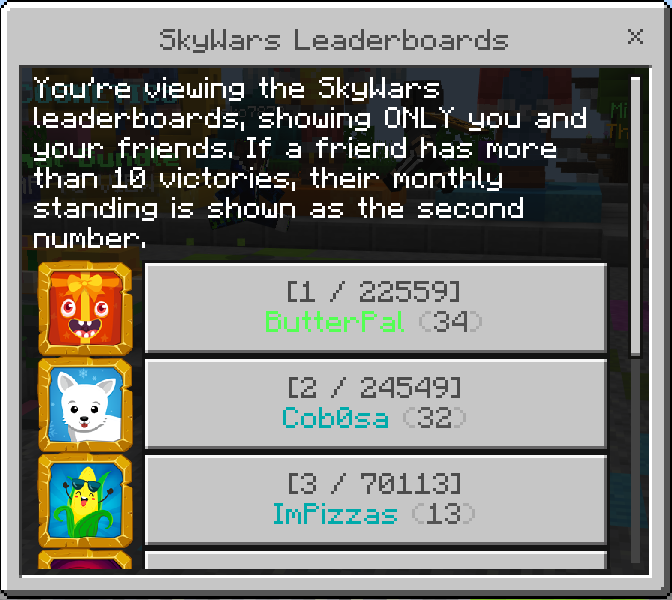 (why does a pizza have a corn as their avatar? Please tells us!)

This is a tech-demo and may be unavailable at times.

You can now view the monthly leaderboards in-game! Simply load into the Hive and run the following command:

You can retrieve your own standings, as well as viewing the current top 100 for supported games. Keep in mind that leaderboards reset monthly! 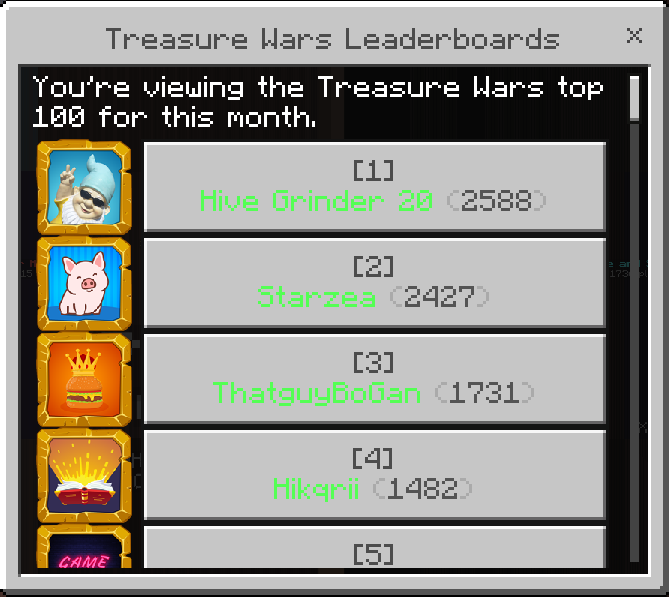 We're aware that, at times, player names load in as 'unset'. This is an issue we will fix before this feature will become more prominently available. For now, simply request the same leaderboard again, and it will load fine.

The leaderboard service is under maintenance. During this time, you won't be able to see the leaderboards online.

Statistics are not affected. You can still see your own statistics in-game.

This maintenance may take over 24 hours.

UPDATE: The maintenance is going well, and is about 75% done at this point.

UPDATE 2: Current month leaderboards are back online. Player search, and previous months, are not yet available.

UPDATE 4: Previous monthly leaderboards will become available again over time, however, this automated process may take a few weeks. There will be no further updates.

To resolve recent instability issues, we will be performing maintenance this (European) afternoon on all regions.

We have no set time for this maintenance, but we predict it will be a quick one.

Thanks for your understanding.

This maintenance is not related to issues with 1.16.20 - Microsoft/Mojang is aware of these issues and will be resolving them.

It's time for a BIG Treasure Wars update! As some of you may have seen, we've been running a preview of the update for the past week. Thank you to anyone who gave feedback as it helped shape this update.

So, what's in this newest update?

We've long heard feedback that you wanted more ways to play Treasure Wars, with one of the highest-rated suggestions being TNT. Today we're adding Boomboxes to the game.

Diamond armor was widely considered too powerful, whist iron armor was considered too expensive and offered only a small amount of defense more than chainmail. We've tried to bridge the gap between the armors to make the game feel more balanced.

As always, if you have any feedback please let us know on our Discord or our forums. Thank you to everyone who gave feedback on the preview! We're excited to hear what you think of this newest update.