We hope you enjoy this mini content update! Hide and Seek will be the next game to get more levels and unlocks.

Survival Games is officially out of beta!

Over the last week, we have been previewing our new Survival Games update and tweaking the game based on community feedback.

We are now happy that the update is balanced, and have rolled out the changes to the Survival Games modes.

We have also released the first of two new maps, Mobius! We will be releasing the second new map next week.

Thank you to everybody who has given us feedback regarding the update. As always, we are still open to suggestions and will continue to tweak the game based on feedback. If you have any suggestions, please be sure to post them on our forums.

You can view the full changelog here, and the balancing changes we have already made here.

We will soon be reverting the change that removed 1.16.40 support from The Hive.

To bring you the best possible experience, we use modern features that require recent client versions. Only supporting the most recent client allows us to keep our server light and easily maintainable, which results in a better experience (less lag, so to say).

However, it is clear that updates 1.16.100 and 1.16.200 have multiple issues that prevent a portion of our players from enjoying Minecraft. We suggest that players affected by issues in these versions communicate these issues to Mojang, who are able to resolve them. Good ways of doing this is reporting and upvoting bugs on MoJira and leaving feedback on the Minecraft feedback website. The Hive always advocates for the best experience for our players, but it's important you make your voice heard to Mojang directly.

We must note that this is a temporary extension to the 1.16.40 support. Future Minecraft versions will introduce complex changes that will render 1.16.40 support unmaintainable.

We use a lot of different ways and channels to collect feedback: this website, Discord, the forums, YouTube and others. We're now introducing a new way to poll our players directly: in-game surveys.

Surveys are delivered to players using MailBot and triggered by a combination of chance and defined criteria. For example, our first SkyWars Update Survey polls 1-in-5 players that are level 10 or above.

Below is our first survey that we're running right now (again, not all players will receive this one!). You will see these from time to time as we gather more feedback on game updates, maps, future updates, and anything else! 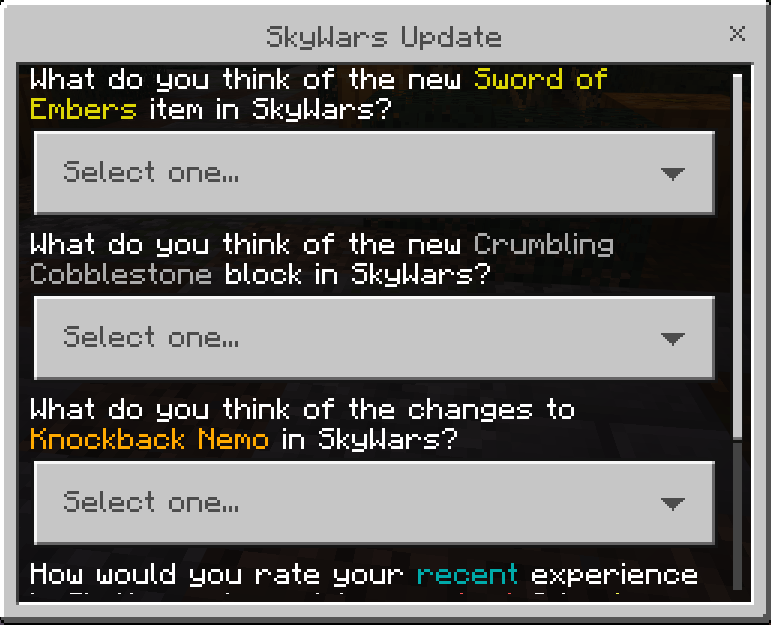 This is the first set of changes to the new Survival Games update, currently in preview. We're constantly reading player feedback and more changes will come if required.

Developer note: We understand that bow/arrow mechanics can feel overpowered. We hope we can have a deeper dive into the damage bows do in the future.

Additionally, loot balance is a very tough thing to get just right. We're constantly reviewing game statistics and community feedback. We will make further changes until it feels exactly right.

This is an experimental change and will be changing regularly based on player feedback.

Developer note: We've seen a lot of discussion from the community about hunger mechanics. We agree that hunger is currently a pointless mechanic, and we are starting to change that with this update. Our hopes are these changes will stop infinite running, and provide more of a use for food.

Developer note: We've seen an increase of players deliberately running in to the void to stop their killer getting loot. We understand this can be frustrating in such a loot-heavy game. We hope this update will fix this.

Preview modes are designed as a way for us to get the community's preliminary thoughts. As a result, things may change before the official release. Additionally, no new maps will be added during the preview, as we want to focus on gameplay feedback.

When held, shows a display pinpointing points of interest such as enemies, supply crates, and teammates.

The boomboxes you know and love for our other games, modified to suit Survival Games, such as shorter fuse time on throw.

Teleporters allow you to travel from point A to point B quickly.

Launchpads provide easy ways to get to hard-to-reach areas.

When placed, will heal all nearby players for 1 health every second for 10 seconds.

When thrown, will call a supply drop at that location.

We've rebalanced the loot set to account for new items and player feedback.

You will now no longer take fall damage during the grace period.

You can now break Tier 1 chests by punching them, dropping all items contained within.

We've removed custom chests in favor of their vanilla counterparts. This reduces the entity count which helps with client performance. Additionally, all maps have had decoration chests removed - any chest you see is now lootable.

We've added support for the new Minecraft fog system. You'll see this in use in the future.

Our art team has made some visual improvements to various 3D assets.

A new prop system is now available, allowing us to add more visual elements to maps. Our first prop is visible in the Flashpoint cornucopia.

Gravestones are now part of the locker system. Although no new gravestones are present during the preview, we hope to add some soon.

Kill counts are now shown on endgame podiums, so you can show just how good you are!

We hope you enjoy this Survival Games preview. This update is still subject to change based on community feedback, so let us know your thoughts.

The following update is now live on SkyWars:

As always, this change is experimental pending community feedback.

Crumbling Cobblestone is a building & bridging block that self-breaks after two seconds. It can be found in regular chests and Resource (Iron) Ores.

Crumbling Cobblestone is an experimental change - we may decide to change it based on community feedback.

To ring in the Year of the Ox, we've decorated the hub! We've also made some changes to the parkour.

We've hidden 12 banners around the hub, each one of them features an animal from the Chinese zodiac: Rat, Ox, Tiger, Rabbit, Dragon, Snake, Horse, Sheep, Monkey, Rooster, Dog and Pig.

If you manage to find them all, there might be a special costume in it for you!